What is the full form of GCC?

Full form of GCC is "Gulf Cooperation Council" and the other expansion is "GNU Compiler Collection" in  C programming.

GCC or Gulf Cooperation Council is an alliance of regional, intergovernmental, political and economic union which includes middle Eastern countries- Saudi Arabia, the United Arab, Kuwait, Qatar, Bahrain and Oman. The establishment of GCC took place in Saudi Arabia and Riyadh in May 1981.The agenda of the GCC is to maintain a unity among its members based on their common objectives and also their political and cultural identities. These identities are rooted in the Arab and Islamic cultures. The union of 2,,673,0100 sq. kilometers. comprised Bahrain, Oman, Kuwait, Qatar, Saudi Arabia and the United Arab Emirates. The United economic agreement between the countries of the GCC or Gulf Cooperation Council was signed on 11 November 1981 in Abu Dhabi. And these countries are very often referred as "the GCC states" or "Gulf countries". 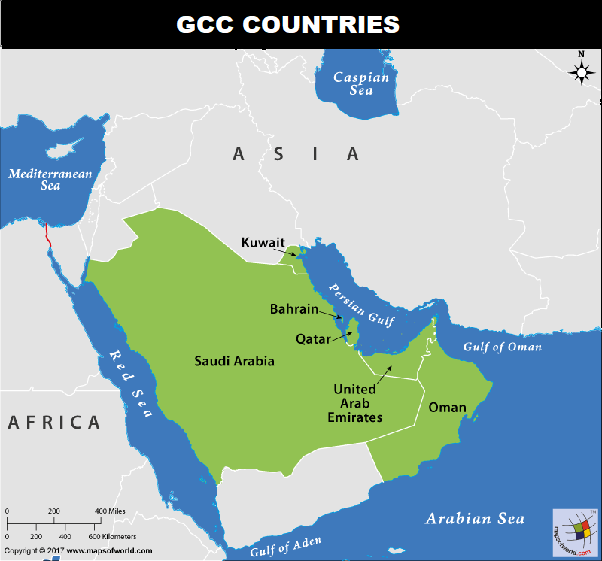 GCC was established in Abu Dhabi on 25th May, 1981. Currently it is headquartered at Riyadh in Saudi Arabia. Since the creation of the council in 1981 its membership has not expanded, with all members being Arab monarchies. The associate membership of Iraq in certain GCC-related institutions was discontinued after the invasion of Kuwait. Yemen was in negotiations for GCC membership in 2007.

The basic objectives of the GCC or Gulf Cooperation Council are :

• To effect co-ordination, integration and inter-connection between the member states in all fields in order to maintain a unity between them.
• To strengthen and deepen the relations, links and areas of cooperation, prevailing between their people in various fields.
• To put together similar regulations in various fields including the following:
➢ Economic and financial affairs.
➢ Commerce, customs and communications.
➢ Education and culture.
➢ Social and health affairs.
➢ Information and tourism.
➢ Administrative and Legislative affairs.
• To stimulate scientific and technological progress in the fields of industry , mining, agriculture , water and animal rresources, to establish scientific research, to set up joint ventures and encourage the cooperation by the private sector for the well being of their people.

The GCC or Gulf Cooperation Council comprises of the main organizations :

• The Supreme Council
The Supreme Council is the highest authority of the GCC or Gulf Co-operation Council. It is formed of the heads of members states. The presidency rotates based on the alphabetical order of their names, among the members of the state. One regular session is held every year. These extraordinary sessions may be convened at the request of any member seconded by another member. The Supreme Council holds its session in the territories of the member states.
• The Ministerial Council
The Ministerial Council is comprised of the Foreign Ministers of the member states or other delegated ministers. The Ministerial Council holds its presidency for the member states which presided the last ordinary session of the Supreme Council. And if necessary, the state which is next to preside in the Supreme Council. The Ministerial Council’s meet up is held in every three months.
• The Secretariat General
The Secretariat General is comprised of a Secretary-General and an Assistant Secretaries-General and a number of staffs, if required. Its headquarters is in Riyadh and Saudi Arabia.
If we talk about the logo, the GCC's logo consists of two concentric circles. On the larger circle, the Bismillah phrase is written in Arabic, on the upper part, which means " in the name of God". And on the lower part the full name of the council is written in Arabic. An embossed hexagonal shape is in the inner circle, which represents the council's six member countries. A map fills the inside of the of the hexagon encompassing the Arabian Peninsula. On this, the areas of the member countries are borderless and colored in brown. The edge of the hexagon are colors which represents the flags of the six member countries.

The Al-Ula declaration was signed by the leaders of the six-members of the GCC or Gulf Cooperation Council which was named after the Saudi city where the summit was held, and a final communique.
The English translation of the closing statement of the summit is as follows :
As a response to the gracious invitation from the Custodian of the Two Holy Mosques King Salman bin Abdul Aziz Al Saud, king of the Kingdom of Saudi Arabia, may God protect him. The Supreme Council held its 41st summit in the city of Al-Ula on the 21st Jumada I, 1442 AH, corresponding to January 5, 2021.

If  you are looking for GCC jobs visit GCCWALKINS website, this is a best site for gulf job interviews