Gulf of Mannar located in
It is located between the west coast of Sri Lanka and the southeastern tip of India. It is bounded to the northeast by Rameswaram (island), Adam’s (Rama’s) Bridge (a chain of shoals), and Mannar Island. The gulf is 80–170 miles (130–275 km) wide and 100 miles (160 km) long. It receives several rivers, including the Tambraparni (India) and the Aruvi (Sri Lanka). 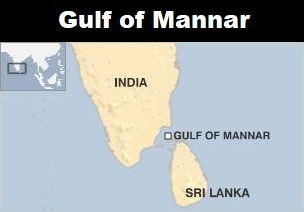 Gulf of Mannar is famous for
The Gulf of Mannar is known for its pearl banks of Pinctada radiata and Pinctada fucata for at least two thousand years. Pliny the Elder (23–79) praised the pearl fishery of the gulf as one of the most productive in the world

The Gulf of Mannar Marine National Park is a group of 21 small and breathtakingly beautiful islands, along with some adjacent coral reefs and shallow water habitats that are located in the Gulf of Mannar in the Indian Ocean.This is the first marine Biosphere Reserve in India. It was established in the year of 1980. As all the 21 islands come under the Marine National Park sphere, tourism and other related activities are not allowed. These 21 islands are divided into the following groups Tuticorin group of 4 islands, Vembar group of 2 islands, Kilakarai group of 7 islands, Mandapam group of 4 islands. All islands except those of Kurusadai, Musal and Nallathanni islands are uninhabited.

Palk Strait and Gulf of Mannar
The Gulf of Mannar and Palk Bay form a transboundary area within the waters off India and Sri Lanka. Palk Strait connects the Bay of Bengal in the northeast with the Palk Bay anc connects the Palk bay to Gulf of Mannar in the southwest. It is 53-80 kilometers wide, studded with a chain of low islands and reef shoals that are collectively called Adam’s Bridge. This chain extends between Dhanushkodi on Pamban (Rameswaram) Island in Tamil Nadu and Mannar Island in Sri Lanka.