The main Full form of UAE is United Arab Emirates 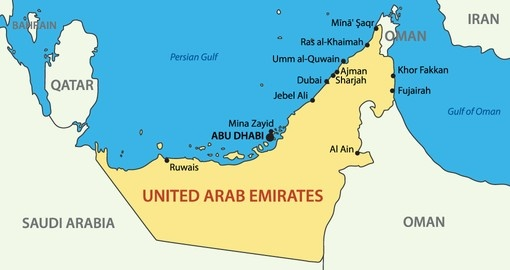 UAE or United Arab Emirates is a country located at the eastern end of the Arabian Peninsula in Western Asia. The emergence of anatomically modern humans has been tracked back as human occupation in the 124,000 BCE from Africa. In the 18th century, an extended holding have been seen by the Portugal and Netherlands. Due to the maritime conflicts which followed for decades, the coastal emirates became known as the Trucial states, they signed the General Maritime treaty with the British in the year 1820 with the establishment of Trucial States as a British protectorate. This agreement was put an end with the independence and on 2 December 1971 United Arab Emirates was established. Six emirates joined the UAE in the year 1971 and Ras Al Khaimah, the seventh emirate joined the federation on 10th February 1972. UAE follows an elective monarchy which is formed from a federation of seven emirates i.e Abu Dhabi, Ajman, Dubai, Fujairah, Ras Al Khaimah, Sharjah and Umm Al Quwain. Oman and Saudi Arabia are the borders of UAE and it shares maritime borders with Qatar and Iran in the Persian Gulf. UAE was divided into number of Sheikhdoms and each of them are ruled by a Sheikh as the name suggests and they together form the Federal Supreme Council.
UAE's population sums up to 9.2 million, of which 1.4 million were the Emirati citizens and 7.8 million were the expatriates. 9.89 million was the estimated population of UAE in 2020. Abu Dhabi, the largest of all these emirates constitute more than three-fourths of the federation's total land area. Abu Dhabi is the hub of oil industry and it borders Saudi Arabia on the federation's southern and eastern borders. UAE's official language is Arabic and their official religion is Islam.

Here are some interesting facts about the UAE or United Arab Emirates:

• UAE is the home to the world's Tallest Building, Burj Khalifa.
• There is no whining about the Monday morning blues! As, UAE starts off it's week on a Sunday. Sunday is like any other day in UAE. The country has Friday and Saturday as their weekends.
• Despite of the visual and cultural dominance of camel in the country, an Arabian Oryx is the national animal of UAE. The 50 Dirham currency note has a picture of the Oryx imprinted on it.
• Abu Dhabi has a near zero crime rate and is considered as one of the safest cities in the world.
• Dubai's Miracle Garden is the most extensive floral garden in the world. This garden covers about 72,00 sq. meters with a spread of 50 million flowers and 250 million plants. Not visiting this haven while in Dubai is no less than a sin!
• The UAE has no permanent rivers but it has plenty of wadis which are filled during the rainier months of the year.
• The UAE was the first country to appoint a Minister for Artificial intelligence in the world. Omar Bin Sultan Al Olama was appointed as the Minister of the State for artificial intelligence.
The Emirati culture has a great influence of the Persian, Indian, and the East African cultures. But majorly the UAE follows an Arabian culture. The expression of the local Emirati identity is inspired by the Arabian and Persian architecture. The folk arts and architecture of the Emirati culture has a noticeably visible Persian influence. The UAE has a diverse culture and society. International trade and tourism has a major role in the economy of Dubai, as it is more open to visitors. Abu Dhabi society is more domestic as fossil fuel extraction is the main source of the city's economy.
The major holidays of the UAE is Eid al Fitr, which marks the end of Ramadan. The National Day is celebrated on the 2nd December which marks the formation of the United Arab Emirates (UAE).
While the UAE is known for its rapidly growing modern cities like Dubai and Abu Dhabi, the country has a rich and eccentric set of landscapes and nature covering the Arab nation which makes it worth for a visit.